The Sunday session each week at Mornington’s Royal Hotel has fast become the place to be, featuring great food, stunning Bay views, a warm open fire and the best Blues, Soul and Rockin’Roll touring artists ‘Live & Free’ each week.  Sunday December 29 the Royal welcomes one of Australia’s finest guitar gurus Geoff Achison as he makes his Sunday Royal return from 3pm.

Locals love Geoff and his background tells us why.  Born on Phillip Island, Achison taught himself guitar in the isolation of rural Australia and forged his own path to a successful career with an explosive blues/funk style and top-notch vocals.

However, Peninsula fans aren’t the only admirers Achison has earned along the way, having toured relentlessly throughout the U.K, U.S and Australia. With each country toured, our blues wizard performs his popular acoustic solo shows or enlists the best local musicians to recreate his brainchild band The Souldiggers as he goes.

Forming the group, Souldiggers is meant to convey the tapping into of one’s soul for honesty and truth, and this is expressed through their music and Achison’s hard work, which continued in 1994 setting up his own record label Jupiter II Records.

These early recordings were received well by fans and critics, which led to him representing the Melbourne Blues Society at the International Blues Challenge in Memphis winning the coveted Albert King Award for his guitar skill.

An extraordinary guitarist who plays quite unlike anyone else, Geoff has been a driving force on the Australian blues/roots scene inspiring and influencing many of his younger compatriots. Besides his music awards he has been honoured in ‘Australian Guitar Magazine’s’ Top 50 Guitarists, True Fire’s ‘100 Guitarists You Should Know’ and he is also Official Patron of the ‘Melbourne Blues Appreciation Society’,

In 2017 Geoff Achison released Another Mile Another Minute, his first all-original studio album in 8 years. This release also featured The Souldiggers and an impressive list of guest artists. It was picked up by US label Landslide Records and scooped the pool at the 2017 ‘Chain’ Australian Blues Awards winning in 5 categories

Watson & Tilders are sadly no longer around, but Geoff’s success serves, in part at least, as testament to their positive influence on the younger generation. Geoff Achison’s journey continues these days with himself an elder statesman of the vibrant local scene and a firm favourite with those in-the-know on the international stage.

Geoff Achison and his band perform Sunday December 29 at Mornington’s Royal Hotel from 3pm with no cover charge.  For more details find The Royal Hotel on Facebook or visit TheRoyal.com.au 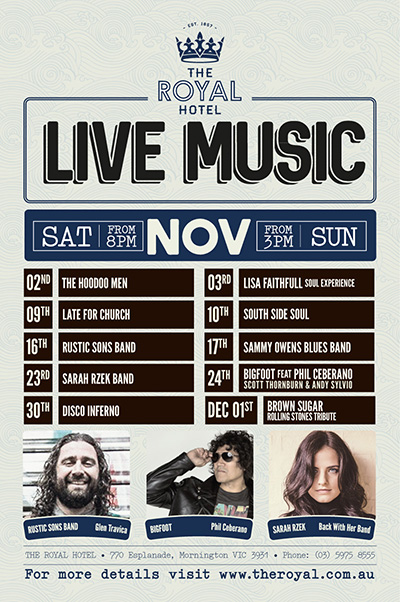 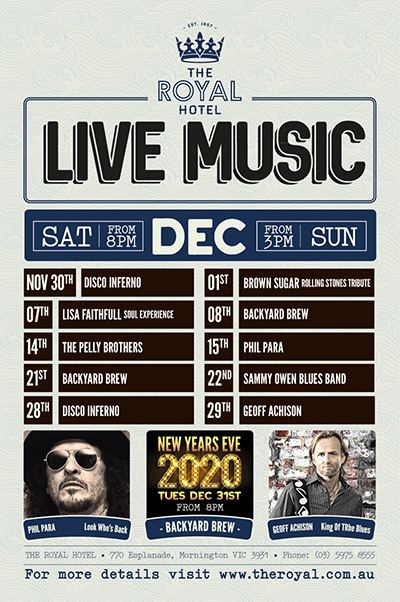