Chopper’s on a mission. He’s told us how to harden up. He’s taken on Bunnings, Subway, craft beer, the Olympics, cat people, activated almonds – you name it! And now he’s decided to take his message to the world with a new country.

After taking over the once great nations of Australia and NZ, rolling them into one and throwing out the crap bits, Chopper has created the world’s newest superpower – Anzakistan – and he’s just the bloke to run it. He may not have much experience, but at least you know where he stands – right behind a moustache.

Heath Franklin is a Logie and ARIA-nominated Australian actor, comedic performer, improviser and writer. Franklin made his television debut on the sketch show The Ronnie Johns Half Hour, from where his character, ‘Chopper’, began and has become an international cult hit, selling over 500,00 tickets worldwide and releasing 3 live DVD specials.

Join the revolution! Viva la Moustache! Chopper’s Republic Of Anzakistan by Heath Franklin at Chelsea Heights Hotel on Friday November 18. Harden up and buy tickets to our glorious leader, Chopper today! Tix from venue or Moshtix. 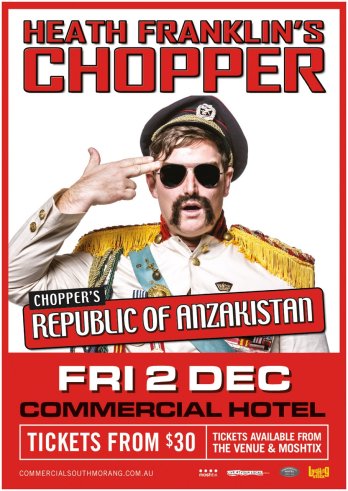