Cup Eve Monday October 31 the York On Lilydale explodes with an Oz Rock Trifecta bringing together the music of three of Australian Rock music’s biggest bands, Cold Chisel, INXS and the mighty Midnight Oil.  Australia’s most renown tribute shows INXSive, Gold Chisel and The Midnight Oils Show bring their rock’nroll roadshow back to one of Melbournes’s iconic live music venues, The York.

It’s a night of non-stop Aussie classics with three big bands at one of Australia’s greatest live music venues.  Join INXSive, Gold Chisel and The Oils for the Australian Made Tribute Supershow on Cup Eve Monday October 31 at the York On Lilydale Hotel, Cnr Lilydale & Swansea Rds, Mt Evelyn.  Tickets available at Moshtix or yorkonlilydale.com.au

EXPERIENCE AUSTRALIAN MADE AND SEE WHY IT WAS LAST YEARS SMASH HIT! 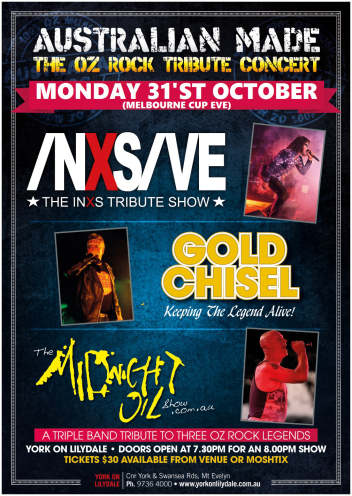