Rewind to some of the biggest Summer’s on record as Rosebud Hotel welcomes back infamous Peninsula party pair Rob & Tarquin for a Friday Flashback on January 8.

An institution on Friday nights for most of the 2000’s, Rob & Tarquin reunite with The Rosey for one huge Summer session of sing-along-songs and tasty faves with all the big dance floor anthems the boys are renowned for.

Holding pole position on many of our local stages for almost two decades, the infamous Peninsula party duo have maintained long residencies at some of the biggest venues, filling them with fans and their own brand of mayhem. Pioneers of studio recorded bass and drum backings, Rob & Tarquin’s ‘party of two’ create a full band sound and lead the biggest ‘all in’ sing-along sessions complete with DJ’s and full show-band style audio and lighting.

Still performing to capacity crowds after 12 years at Mornington’s Bay Hotel on Saturday’s, Rob & Tarquin built the entertainment culture around many of today’s larger local venues. Launching as the first ‘live act’ at Davey’s in the 90’s and paving the way for many more to come. “We started with 20 people on our first night. Within weeks it was clocking over 1000” recalls co-vocalist Tarquin Mills. “Our very first Saturday gig lasted 7 years…and we’re still only on our second!” Rob & Tarquin reigned over Rosebud on Fridays after similar long term success at key venues including the Cruze, Langy and another decade milestone residency at the Village Green.

Rob & Tarquin return to Rosebud Hotel for one night only on Friday January 8 at 9pm. The following week Rosebud presents a 90’s rock tribute to Pearl Jam & Green Day on Saturday January 16.   For the complete Summer Event Guide at Rosebud hotel visit www.rosebudhotel.com.au 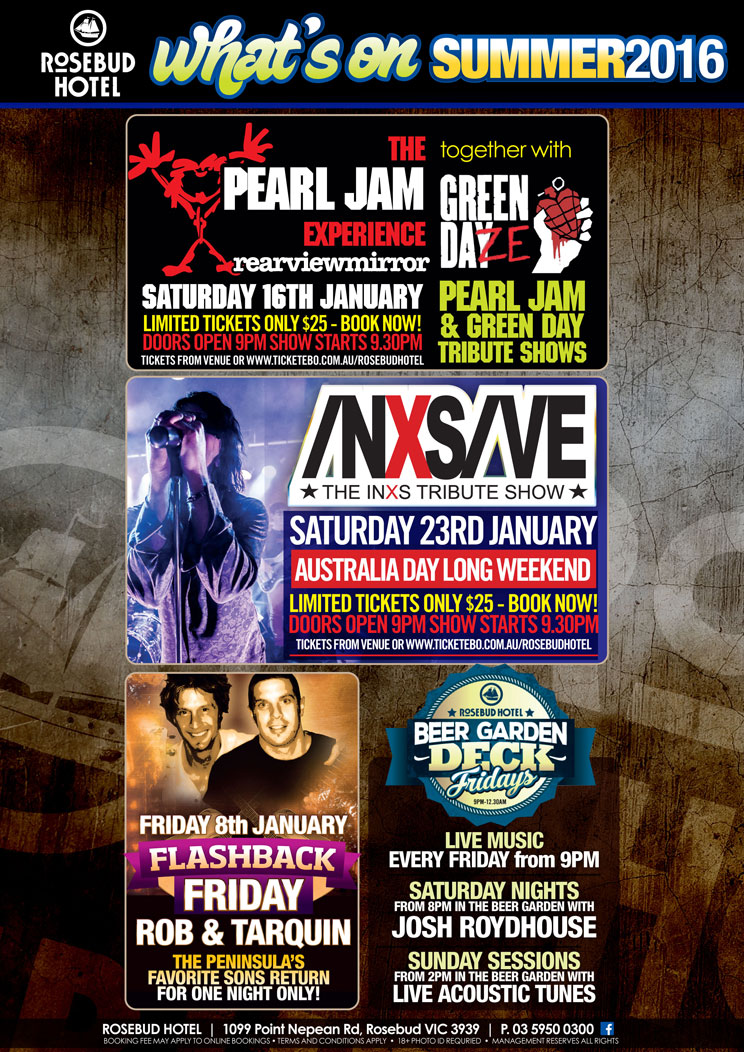