The name Geoff Achison is synonymous with the guitar and blues in this country, as well as in many parts of the world; a reputation born from years of hard work and relentless touring. Hailing from rural Malmsbury in South-Eastern Australia, Achison’s apprenticeship began in earnest when as a 20yr old he joined the legendary bluesman Dutch Tilders’ band The Blues Club. Almost nonstop touring around the country with the infamous Tilders’ band over the following 5yrs honed and established Achison’s own unique and masterful guitar skills.

In the early 90s, Achison left the band to form his own outfit, The Souldiggers, naming the new venture in reflection of his new musical direction. In his own words, “the idea was to have a name that described the music, and I greatly admired the blues philosophy of tapping into ones soul for honesty and truth.” In 1994, Achison formed his own record label, Jupiter 2, and released his first solo album, Big Machine, to considerable critical acclaim. The following year Achison announced himself as a serious player in the international blues scene by winning the prestigious Albert King Memphis Award, representing the Melbourne Blues Appreciation Society. It was around this time that he also won a highly sought endorsement deal with the iconic Gibson Guitars’ acoustic division. In 2007, The Souldiggers won the Chain Blues Music Award in Australia, and within twelve months Achison was named in the top ten new guitarists in the prestigious Guitar Magazine.

Both with The Souldiggers and as a soloist, Geoff Achison has been widely recognised by his peers and critics, winning awards over the years for his writing, performing and his prolific recordings. His unique sound has been described as a blues/funk style, all his own, that can be subtle one moment and highly explosive the next, with soulful, heartfelt singing drawing comparisons to Joe Cocker and Warren Haynes. This, all added to technically brilliant and highly rhythmic guitar playing that has seen him share the stage with such prominent names as Tommy Emmanuel, Phil Manning and legendary US artists Jorma Kaukonen, Delbert McClinton, Hubert Sumlin, Clarence ‘Gatemouth’ Brown, John Mayall, the Allman Brothers and even the great Les Paul.

Achison recently released his 20th Anniversary Concert on DVD and has been one of the busiest Blues-men in the biz throughout 2015. In a treat for local fans, Geoff returns for a hometown gig at Davey’s Sunday Soultrain on November 20. Sunday Soultrain presents some of Australia’s best Blues, Soul and Rock’n Roll each week with no cover-charge from 3pm.

As Bayside & Peninsula Blues lovers we are certainly blessed to have musicians of Geoff Achison’s caliber playing in our own backyard. If you have yet to experience this talented artist live – just do it! 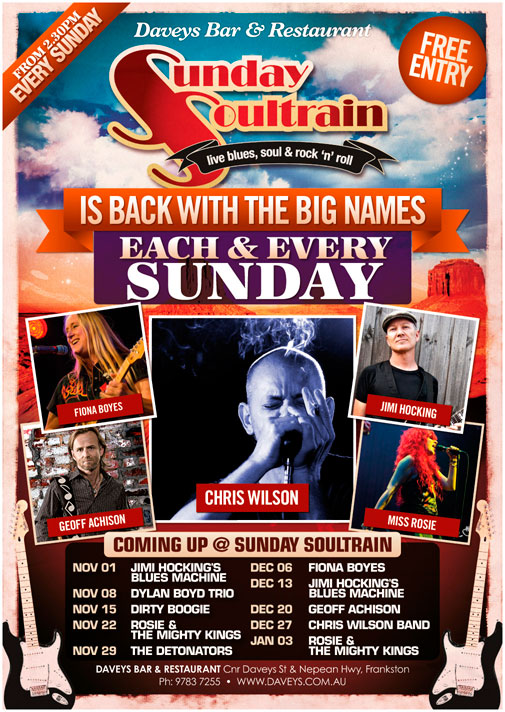