The RED HOT SUMMER TOUR is back in 2019 and the Series One announcement is nothing short of massive! Featuring Australia’s favourite son Jimmy Barnes, Joan Jett and The Blackhearts, The Living End, Diesel, Richard Clapton and Chocolate Starfish, the run of eight dates takes in South Australia, Western Australia, Tasmania, New South Wales, Queensland and Victoria including Mornington Racecourse on Saturday January 19. With such a stellar line-up, it isn’t hard to see why the RED HOT SUMMER TOUR has earned the reputation as one of the best regional festivals on the touring circuit.

Promoter Duane McDonald, who established the RED HOT SUMMER TOUR over a 9 years ago, had a strong vision from the start about bringing world-class rock acts to regional areas. “Our ethos starting out was to take the type of artists you would see performing at festivals in metro centres, and bring them to the regions,” he says. “Music fans are everywhere, and just because they don’t live in a capital city doesn’t mean they shouldn’t have access to some of the best live acts. We are so proud to have grown the festival to encompass dozens of shows – across three different series annually – with bills that include some of the world’s most iconic artists. We are excited about 2019 and Series One is going to rock the socks off of music fans!”

Jimmy Barnes is synonymous with Australian rock’n’roll. He is also no stranger to the RED HOT SUMMER TOUR. As the legendary frontman of Cold Chisel, and though his own chart-topping solo career, his incendiary live show now includes classics like Khe Sanh, Flame Trees, Working Class Man and No Second Prize. Jimmy recently enjoyed his 15th #1 album in his homeland – surpassing the Beatles’ record. Over the last two years his two volumes of memoirs – Working Class Boy and Working Class Man have both been bestselling books and they have also both won ABIA Awards as Australia’s Best Biography. The associated Stories & Songs tours have attracted some of the best reviews of Jimmy’s already stellar career so he is literally in ‘Red Hot’ form right now. Any time in the company of Jimmy Barnes is the epitome of a rock experience, and his performances on the 2019 RED HOT SUMMER TOUR promise to deliver all that and more!

There is no doubt about it, Joan Jett and the Blackhearts are responsible for some of the most anthemic punk and rock music of all time. Cherry Bomb is a track embraced by girls all over the world, young and old. Bad Reputation, was recently certified as a digital Gold Record. Joan Jett’s songs are all over TV and Film. The Rock and Roll Hall of Famer is one of the most respected performers of all time. Her music is pure Rock and Roll, and she likes her Rock and Roll serious. Joan Jett is as relevant today, as when she started out. Audiences at the RED HOT SUMMER TOUR will be treated to timeless rock anthems such as I Love Rock N Roll, I Hate Myself for Loving You, Crimson and Clover, Do You Wanna Touch, Cherry Bomb, Bad Reputation, and Little Liar, to name a few. Joan’s legacy has grown as a result of decades of hard work and unwavering dedication to her principles. Her live show has always been legendary. If you miss this – give up!

The Living End are considered Australian rock royalty, and for good reason. Their blistering live performances have seen them perform far and wide, and their reputation precedes them, they rock from the first note to the last. When The Living End first smashed onto the scene in 1997 with their double-A single Prisoner of Society and Second Solution, they embraced a new Australian sound and fans and critics sat up and listened. Since then they have released seven studio albums, two of which have debuted at #1 on the ARIA Chart – four of those are Platinum and two are Gold. They have been nominated for an incredible 27 ARIA Awards. They are close to releasing their eighth studio album and audiences at the RED HOT SUMMER TOUR will get to see the band in full flight!

As one of the country’s most revered guitarists, Diesel first burst onto the music scene as Johnny Diesel and The Injectors and instantly turned heads. When he went solo, he earned even more fans, both across the blues and rock scene and with hits like Tip of My Tongue, Cry in Shame, Come to Me and Never Miss Your Water, plus many more. He is the musician’s musician – his performances are multifaceted, audiences are treated to great vocals while being mesmerised by his guitar solos. RED HOT SUMMER TOUR audiences are certainly in for a treat.

Richard Clapton is an artist of legendary status. With songs such as Deep Water, Capricorn Dancer and Girls On The Avenue in his arsenal, Richard has captivated audiences for decades. He released his debut Prussian Blue in 1973 and has never looked back. Still making music and still performing to packed houses, he is a true pioneer of the rock scene. With a career spanning four decades, he has a wealth of experiences, all of which are channelled into every performance. His inclusion on the RED HOT SUMMER TOUR is an exciting one for music fans.

For music lovers looking for a special bit of concert showmanship, then look no further than Chocolate Starfish. Fronted by the enigmatic Adam Thompson, the band is known for their high energy live performances. With songs like Four Letter Word, Mountain and You’re So Vain, Chocolate Starfish powered onto the Australian music scene in the 1990s and quickly cemented themselves as an influential force. They produced two Top 10 albums and six Top 50 singles, and their inclusion on the RED HOT SUMMER TOUR again in 2019 is by popular demand.

The RED HOT SUMMER TOUR is always a sell-out series. The 2018 run saw many of the shows sell-out several months before and tickets are always coveted. Don’t miss out on tickets to the 2019 tour – these shows are what music memories are made of! 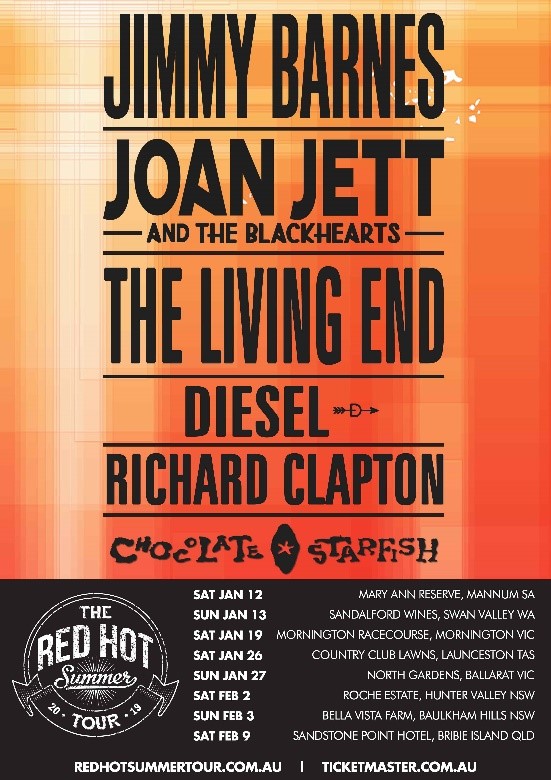