Iconic Aussie rockers Grinspoon have today released their highly anticipated, 20th Anniversary deluxe edition of the album that propelled their careers into the stratosphere, Guide To Better Living. Fittingly, the release lands on the day they are set to kick off their upcoming national tour which is now almost completely sold out, as fans clamour to secure their tickets. Hockey Dad are already on board as main support for the epic tour, and today Grinspoon are chuffed to announce their additional supports My Echo, Good Boy, Royal Chant and The Dead Love who will be jumping on the road for a bunch of shows each.

Having just performed in the coveted slot at the State of Origin on Wednesday, Grinners are busier than ever – and their fans cannot get enough. Tickets to their Tivoli Theatre show sold out in just thirty minutes after going on sale, and now more than half the tour is sold out, with 20 of the 31 shows already certified sell-outs and very limited tickets are still available to all other shows.

To correspond with the tour, the accompanying expanded, multi-format reissue of Guide To Better Living is available from today. The Grinspoon-curated 20th Anniversary edition of Guide To Better Living sees the original 16-track album expand to a mammoth 49 track feast of rarities, live tracks and unreleased recordings. The album also appears on vinyl for the very first time in the form of a limited edition red vinyl pressing, coupling the original album with a second disc Live At CBGB’s – an incendiary 10-track live recording of the band taken from the fabled CBGB’s venue in New York.

Thrilled with the response to the reissue of the album and the hugely popular tour, frontman Phil Jamieson has a message for the album: “Happy 20th birthday GTBL! We are so proud you have grown up to be the album we imagined you’d become… it’s such a delight to see the people of Australia wanting to see you live and listen to you on vinyl. Never in our wildest dreams did we expect you to turn out so great – but you did. You must have had some awesome parents! All our love, GSPN.”

The Guide To Better Living Tour will see the band play the album cover to cover across July-September 2017, alongside a selection of later favourites from their albums that followed.

Grinspoon is Phil Jamieson on vocals, Pat Davern on guitar, Joe Hansen on bass and Kristian Hopes on drums.

Grinspoon play The Pier Bandroom in Frankston this Friday August 4 and the new album Guide To Better Living Deluxe 20th Anniversary Edition is out now.  For more details visit grinspoon.com.au 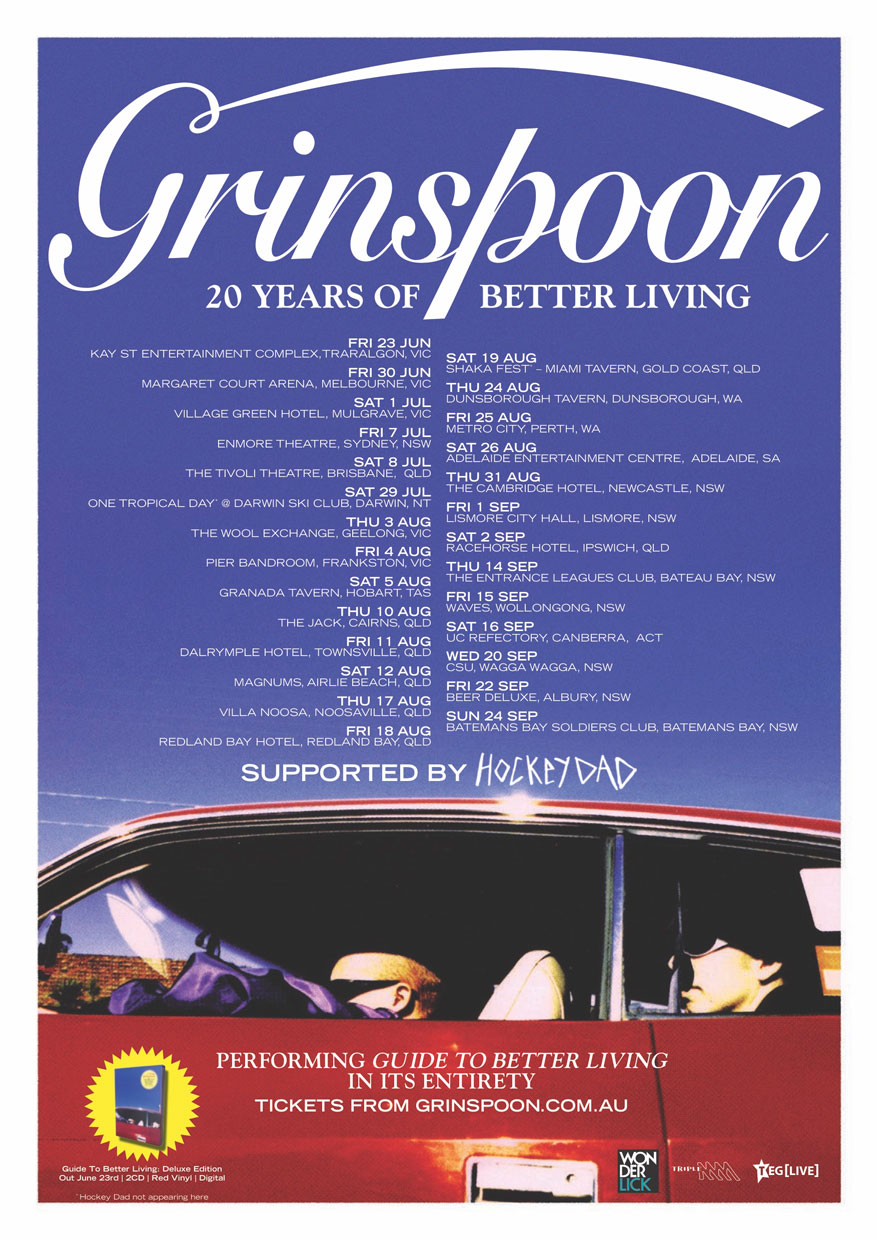