Mornington’s Royal Hotel launches back in to Live Music with some great feature artists on deck every Saturday night and Sunday arvo. Sporting a significant renovation, an exciting new menu and receiving rave reviews from local music fans, there’s a tockin’ LIVE option back on the Espy in the heart of Mornington.

In a great mix of local talent and some of Melbourne’s premium performers, band fans will certainly be impressed. On weekly rotation you can expect to find Sammy Owen, Phil Para, The Detonators, Nat Allison, Peta Evans-Taylor, and many more to come.

This Saturday June 24 Peta Evans-Taylor brings her power combo to The Royal. Peta is a Down to earth Aussie chick with a big voice and even bigger dreams. This chameleon of image and tone climbed to the top 3 on Team Madden – The Voice Australia 2015 and sent the online world into a frenzy. “No one else on this show can do what you just did” – Benji Madden.

On Sunday June 25 The Royal welcomes back the gutsy, raw blues sound of Rod Paine and The Fulltime Lovers with their own blend of country, Chicago & folk blend blues making always for one hell of a low down dirty, smokin’ hot gig from 3pm.

Nat Allison returns on Saturday July 1 and is ready to rock. Nat performed thousands of gigs on our local stages before relocating o the UK to play guitar on legendary ‘Suzi Quatro’s’ latest album titled ‘In The Spotlight’ as well as being a guest on stage with Suzi on her 2011 Australian tour. Since then, Nat has toured the country playing in Suzi Q’s band for the Red Hot Summer tour and has only just arrived back from a second National Tour with Suzi concluding in February.

Support live music and check out The Royal, 770 The Esplanade in Mornington every Saturday night from 8pm and Sundays from 3pm. For a full roster of weekly acts find The Royal Hotel on Facebook or check out the Pearl Gig Guide at www.pearlhq.com.au. 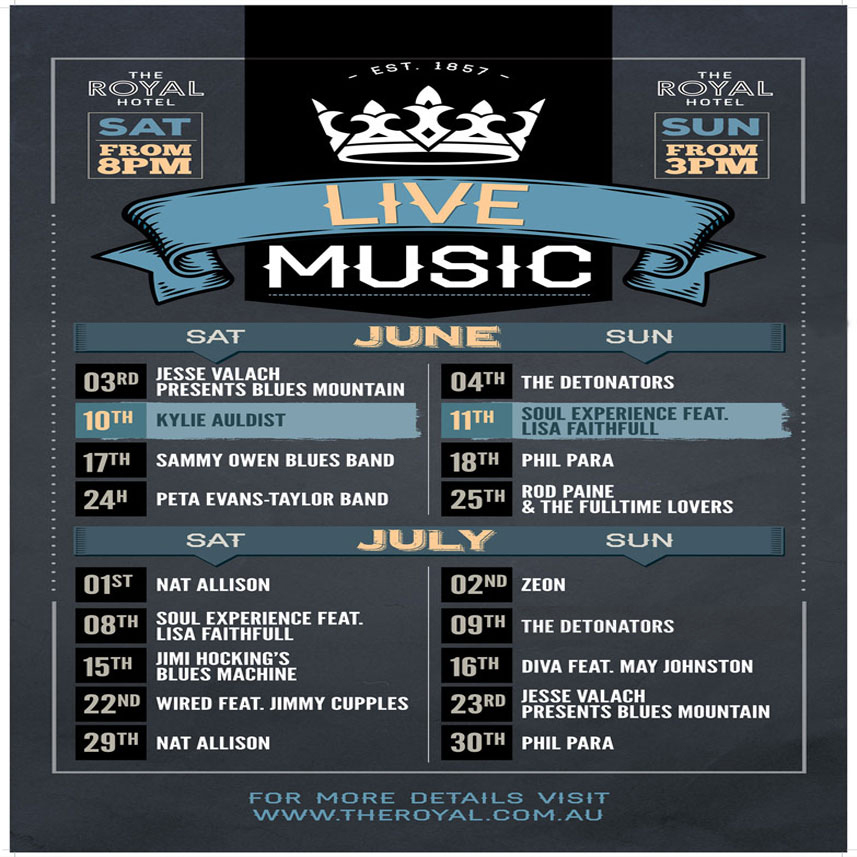