The Royal Hotel returns with another month of live music in May kicking off with local legends Lee Harding and the boys from Bedrock.  The driving force behind some of the biggest party nights on the Peninsula in an era when hard rockin’ cover bands dominated local stages, the mighty Bedrock boys are back in town and ready to rock a Sunday sesh at the Royal on Sunday May 1 from 3pm with plenty more familiar faves headed our way each week.

Before Australian Idol, Lee hit the pubs and clubs as a loyal fan,  hot on the tail of favourite band, a covers band named Bedrock.  Bedrock were a rockin “party band”  with a huge repertoire of top 40 hits from the 60s to present day, ranging from Centrefold and Jessie’s Girl, to hard hitting hits by Lee’s heroes Good Charlotte and Green Day.  His dreams came true when Bedrock shuffled their lineup and were auditioning for a new lead singer. Even though the Bedrock boys didn’t know who he was, or if he could even sing, Lee was dragged up on stage for a rendition of Blink 182’s “Dammit”.  On the spot, Bedrock adopted Lee as their new lead singer and the rest was history. “I’d been going to see them since I was 16. I saw them every single week so I knew every song when I joined Bedrock” said Lee (way back then).

Lee and the boys from Bedrock boys continued to drive some of the most iconic party nights of the past, at local venues including long standing residencies at Flanagan’s and The Royal.

More than a decade later Lee Harding still remains one of Australia’s leading entertainers, with a recent return visit to our TV screens on The Voice, touring his Michael Hutchence inspired show Mystify, and continuing his rockin’ role out front of his beloved band Bedrock with band mates Aaron Bateman, Simon Holmes and Mick Spencer.

Sunday May 1, Lee Harding and Bedrock boys are back where it all began at Mornington’s Royal Hotel from 3pm with no cover charge.  Get ready to rock… it’s gonna be a cracker!  For more info visit www.theroyal.com.au 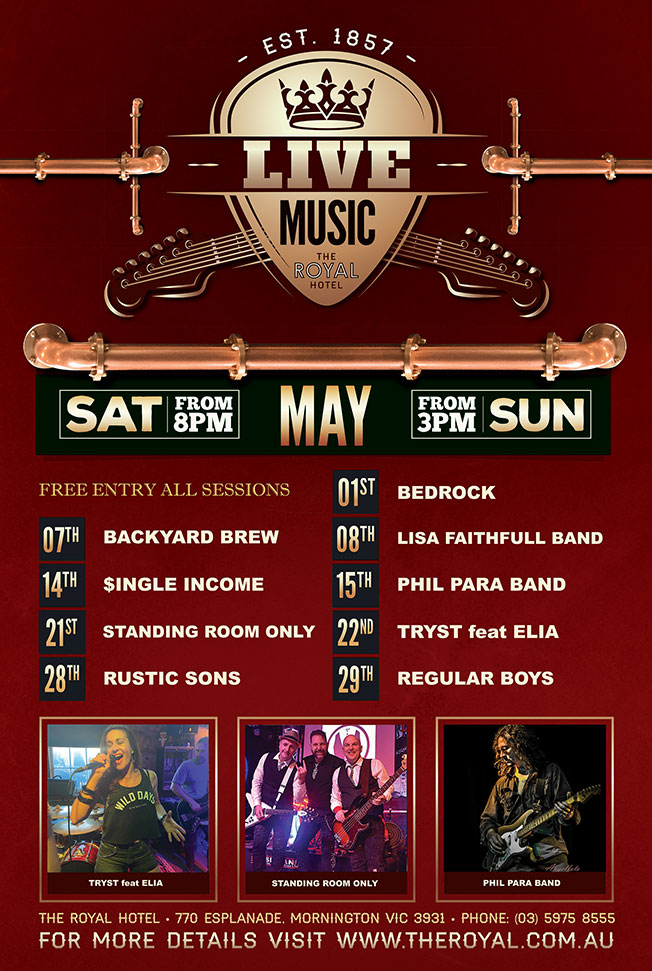