“Thunder Road” was written and performed by Bruce Springsteen, and is the opening track on his 1975 breakthrough album Born to Run. It is ranked as one of Springsteen’s greatest songs, and often appears on lists of the top rock songs of all time. Cup Eve, Monday November 6, Springsteen fans are in for a treat as kick-ass touring show ‘Thunder Road- The Songs of Bruce Springsteen’  hit the Matthew Flinders Hotel with their tribute to ‘The Boss”.

Formed in 2009, featuring a line up of seasoned and professional musicians and a repertoire of over 30 songs, Thunder Road is dedicated to enjoying and sharing Bruce’s music in a live setting. The group captures the classic Springsteen sound, and remains true to the spirit and energy of the music, while delivering the songs with the passion and conviction of the Boss. Not wanting to disappoint the true fans, the Thunder Road show comprises of old and new Springsteen songs with some well accepted surprises.

Thunder Road takes their audiences on a musical journey through Bruce’s entire career. Playing all of Bruce’s classic hits from ‘Born to Run’ to ‘Born in the USA’ and through to his current day releases. With a full 7 piece ‘E-street’ style backing band, ‘Thunder Road’ deliver the full Springsteen show like no one else.

Celebrating the music of Bruce Springsteen rather than presenting an imitation, Thunder Road pride themselves on their authentic approach.   “I’m a little Aussie guy, doing Bruce Springsteen” says vocalist/guitarist Gavin Leadbetter. “It’s not like I’m ever going to sound like him, but to put the songs across with the same energy and to get the band-sound right, it works! The band plays the songs really well, and you give it everything. You leave nothing on stage. You’re all spent when you’re finished.”

Thunder Road are without doubt Australia’s number one Bruce Springsteen show. Catch them live and large at Matthew Flinders Hotel on Cup Eve Monday November 6.  Dinner & Show from 6.30pm and Show only from 8pm with tickets available now at venue or Oztix. 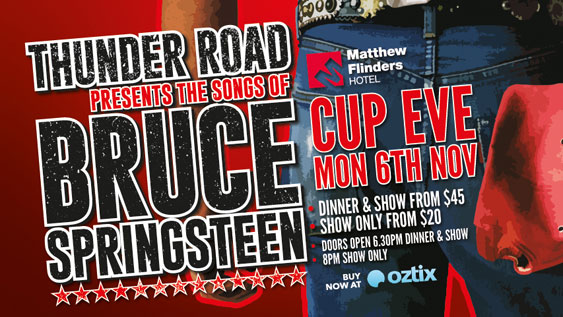