Oz Blues mountain Jesse Valach makes a welcome return to Mornington’s Royal Hotel Saturday August 17 but it ain’t how you seen him before.  Jesse’s back with his brand new BIG band Jesse & The Testaments and Peninsula Blues fans are in for a real treat.

After 4 years sitting just below the radar Melbourne’s fiery blues/soul infused, reggae/roots inspired, singer/songwriter, and lead guitarist Jesse Valach is now starting to attract the attention he deserves. Weaving together intense guitar and soulful vocals, Mr Valach takes you on a journey from lights down low soul ballads to energetic shuffle romps delivered in demanding fashion. Mr Valach has performed alongside some of Australia’s biggest names in blues music including Russell Morris, Geoff Achison, Jeff Lang, Lloyd Spiegel, Jimi Hocking, Ray Beadle and on numerous occasions he has been the dynamic guitarist behind renowned harmonica player Mr Chris Wilson. Mr Valach first made a name for himself honing his craft at local blues jams and after being selected to perform on the “Unearthed Stage” at The Wangaratta Jazz and Blues Festival and Winter Blues Festival in Echuca by the Melbourne Blues Appreciation Society alongside his former outfit Blues Mountain their sound caught the rapt attention of everyone from the loyal traditional blues followers to the casual-part time listener.
With an unmatched dedication, hard work, devotion, and a killer rhythm section to boot Jesse Valach presents Blues Mountain produced a tight riveting live show and with their debut album coming in at #3 on the Australian Blues and Roots radio airplay charts, it is a definite testimony to that. Mr Valach’s second release ‘Separation Street’ also enjoyed extensive radio airplay hitting the #2 spot and receiving a nomination for Best Blues Album of 2015 at The Age Victorian Music Awards. Performing close to 200 shows a year including festivals such as Thredbo Blues, Wangaratta Jazz & Blues, Blues on Broadbeach, Australian Blues Music Festival, and Queenscliff Music Festival. With two jam packed album launches under his belt and very successful over seas tours in New Zealand and Fiji, Mr Valach also holds the prestigious honour of being Melbourne Blues Performer of the Year 2016 where he represented Australia at the International Blues Challenge in Memphis Tennessee. Now with a newly renamed outfit The Testaments and their new single “Testify” out late Feb 2019 Mr Valach has proved that from local blues jams to the international stage he is a musician who is indeed on the rise.

Jesse & The Testaments make their Royal debut Saturday August 17 from 8pm with no cover charge.  Get in early to grab a spot by the big open fire! 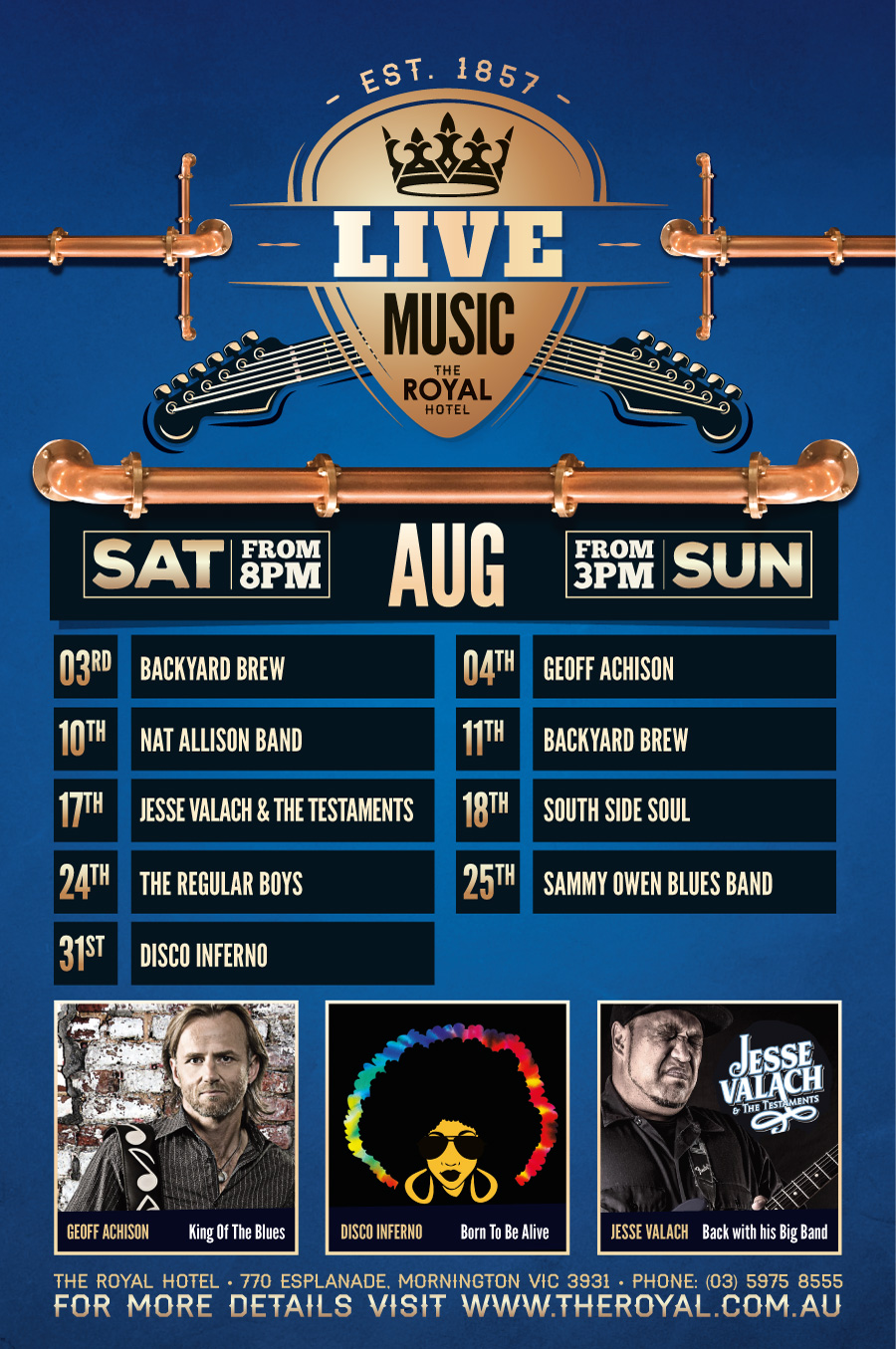