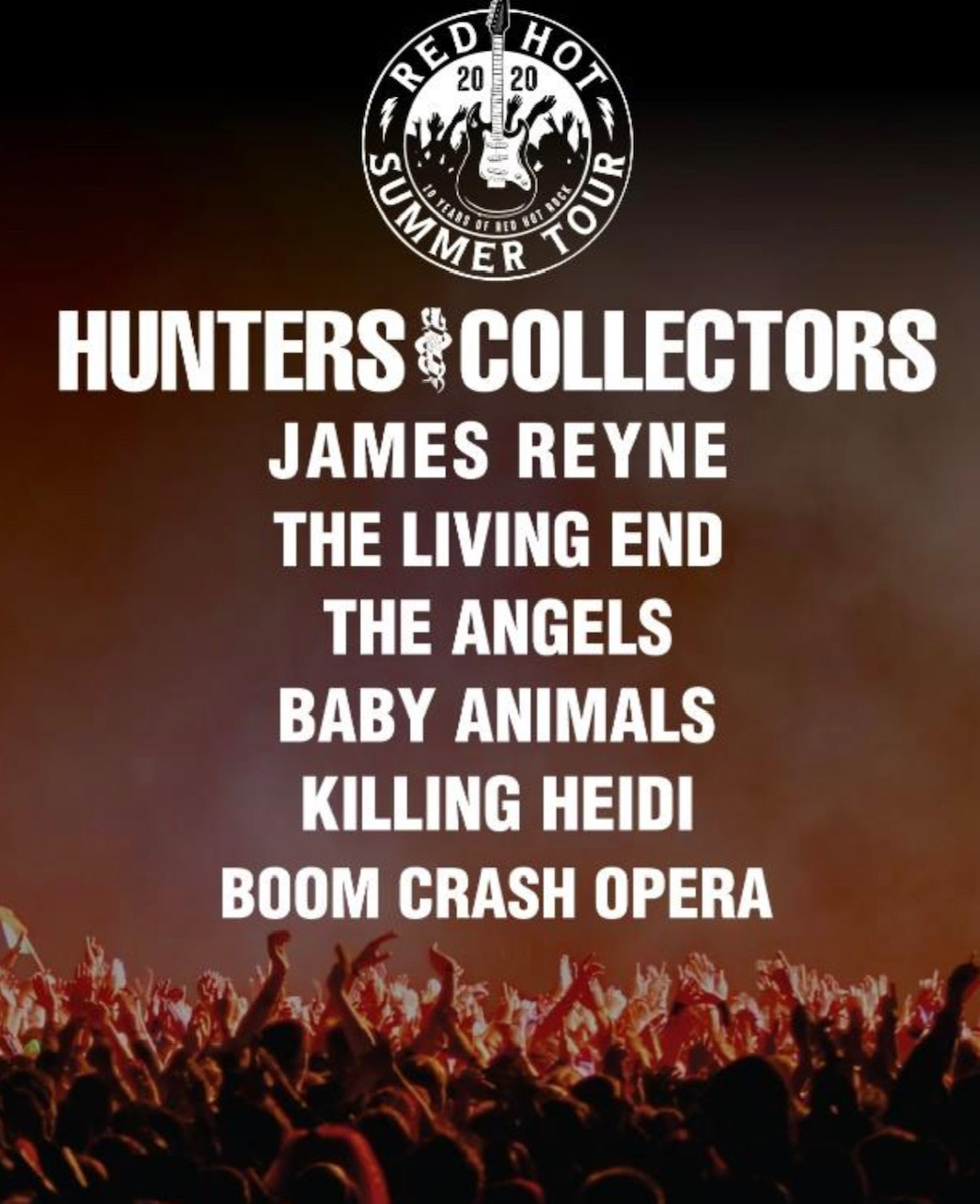 TICKETS GO ON SALE FROM 9AM AEST THURSDAY 8th AUGUST 2019

The RED HOT SUMMER TOUR celebrates 10 years of Red Hot Rock in 2020 and in true style, organisers have put together an incredible all Australian line-up for a massive four-month series of dates. In an incredible coup for music-fans, ARIA Hall of Fame inductees Hunters & Collectors are reuniting to headline the 2020 tour, bringing with them special guests James Reyne, The Living End, The Angels, Baby Animals, Killing Heidi and Boom Crash Opera.

“The past 10 years have gone so fast and we have been so proud to see the RED HOT SUMMER TOUR continue to grow each year,” says Duane. “The support we have received from audiences has been phenomenal. To everyone who has attended a RED HOT SUMMER TOUR show over the last decade – thank you. You are the reason we do what we do, and will continue to bring you the best quality music experience, every year. We can’t wait to celebrate the 10th anniversary of Red Hot Rock with music fans around the country.”

Reforming for this special 10th anniversary of the RED HOT SUMMER TOUR, Hunters & Collectors performances are a rare thing indeed and a huge coup for music fans. The legendary band disbanded over two decades ago and have only performed again a handful of times since – notably at The Sound Relief Concert in 2009 and a brief run five years ago. Banding together again specifically for the RED HOT SUMMER TOUR is apt, considering that Hunters & Collectors voracious live performances are so well suited in a festival environment. With smash hit songs such as When The River Runs Dry, Say Goodbye, Do You See What I See, True Tears Of Joy, Holy Grail and the anthemic Throw Your Arms Around Me, Hunters & Collectors have sold over one million albums spawning 19 hit singles.

“The lads are very excited to be getting out into all the regional towns that made them welcome when they were touring at their peak throughout Australia,” says Hunter & Collectors lead singer Mark Seymour. “This tour is going to be huge.”

James Reyne has been treading the boards in the rock halls of Australian music for decades. From his time fronting the legendary Australian Crawl through to his successful solo career, James’ music is part of Australian history. As a prolific songwriter and strong vocalist, it’s no surprise that James has won accolade after accolade for his contribution to music. When Australian Crawl split in the mid-1980s, James embarked on a successful solo career. James Reye stands alone within an elite cluster of exclusive Australian performers.

The Living End are considered Australian rock royalty, and for good reason. Their blistering live performances have seen them perform far and wide, and their reputation precedes them, they rock from the first note to the last. When The Living End first smashed onto the scene in 1997 with their double-A single Prisoner of Society and Second Solution, they embraced a new Australian sound and fans and critics sat up and listened. Since then they have released seven studio albums, two of which have debuted at #1 on the ARIA Chart – four of those are Platinum and two are Gold. They have been nominated for an incredible 27 ARIA Awards. They released their eighth studio album Wunderbar in September 2018, and audiences at the RED HOT SUMMER TOUR will get to see the band in full flight!

When it comes to great Aussie rock, it doesn’t come much better than The Angels. It’s been over four decades since brothers Rick and John Brewster co-founded the iconic band and have penned some of Australia’s most anthemic tracks. The Angels are widely reputed for their killer live shows. With hits like Long Line, Marseille, Be With You, After the Rain, Shadow Boxer and Mr Damage to name a few. Audiences have always loved seeing The Angels on the RED HOT SUMMER TOUR and 2020 promises to really rock!

Baby Animals burst onto the Australian scene in the 1990s with a solid rock force and a sassy lead singer. Suze DeMarchi proved that girls could rock just as hard as guys and the Baby Animals soon kicked some impressive rock butt with hits such as Rush You, Early Warning and One Word. The band scored themselves ARIA awards for best album and toured the globe. When they split in the mid-1990s they ended a special era of Australian music. The band’s recent reformation and inclusion again on the RED HOT SUMMER TOUR line-up is an opportunity for music fans to see their original rock at its best.

Killing Heidi also celebrate an auspicious anniversary in 2020, two decades since the release of their rock-pop debut Reflector. The smash hit singles – including Weir and Mascara – embedded the album in Australian music history, took out four ARIA awards and reached four times platinum status. It also catapulted Killing Heidi and its teen musicians – Ella and Jesse Hooper – into international superstar status. The Hooper siblings were revered for their songwriting prowess and their subsequent albums earned them critical acclaim.

Marking another milestone on the tour, Boom Crash Opera celebrate the 30th anniversary of their ARIA Top 10 album These Are Crazy Times, which spawned smash singles such as Onion Skin, The Best Thing, Talk About It, Get Out Of The House and Dancing In The Storm. To make the occasion even more special, the band – Peter Farnan, Peter ‘Maz’ Maslen and John Favro – are excited to welcome back Dale Ryder who will lead the vocal charge. Audiences will be treated to all the hits, including Hands Up In The Air, Her Charity, Love Me To Death and Great Wall to name a few. Boom Crash Opera have a lot to celebrate and what better place to do it than on the RED HOT SUMMER TOUR in 2020.

Tickets are only available through authorised ticket outlets listed. Patrons are advised not to purchase tickets from Viagogo or other Third Party Sellers, as fraudulent tickets will not be honoured.