Prepare to be blown away with the magic that is Queen Forever – The Australian Queen Tribute Show. One of the most powerful and dynamic live acts in music history is recreated on stage with such brilliance and accuracy, you’ll think you’re seeing the real thing.

Set amongst the trees on rolling greens of Rossdale Golf Club this unique outdoor performance, reminiscent of Queen live at Wembley, expect all the hits like We Will Rock You, We Are The Champions, Another One Bites The Dust, Fat Bottomed Girls, Don’t Stop Me Now, Crazy Little Thing Called Love, Somebody to Love and of course, Bohemian Rhapsody. The essence of Queen is captured perfectly with incredible costumes, a stunning portrayal of Freddie Mercury by Gareth Hill and a stage show that will blow you away.

Queen reined the world rock charts for more 20 years and it is fitting that such dedicated performers bring them to life.  Die-hard Queen fan Gareth Hill, who assumes the role of lead singer Freddie Mercury, is a must see, sounding, acting and looking incredibly like the flamboyant legendary vocalist.

Add to the line up, fellow life long Queen fans Scotty Hotpants, replicating the licks of Brian May, Darryn McLaughlin as reliable bass player John Deacon, Danny Oakhill as Spike on keys and Brad Hodge with a replica Wembley 86′ drum kit as Roger Taylor, and you’ve got yourself the most technically accurate Queen tribute show in the country.

The show brings to life the brilliance and magic of Queen with no reliance on backing tracks and all songs played in the original keys. It’s pretty simple. These guys sound like Queen, perform like Queen, look like Queen and have a hell of a lot of fun doing it, as will you, watching it.

Queen Forever rocks Rosdale on February 18. Whether you’re 8 or 80, this show is for you, so grab your picnic blanket ad air guitars, put on your dancin’ shoes and bring the whole family!!

Live @ the Green on February 18 at Rossdale Golf Club in Aspendale. Gates open at 3pm for an afternoon of food & drinks, kids entertainment, music and fun in the sun from 4pm. Tickets are available now from trybooking.com or visit www.rossdalegolf.com.au for more details. 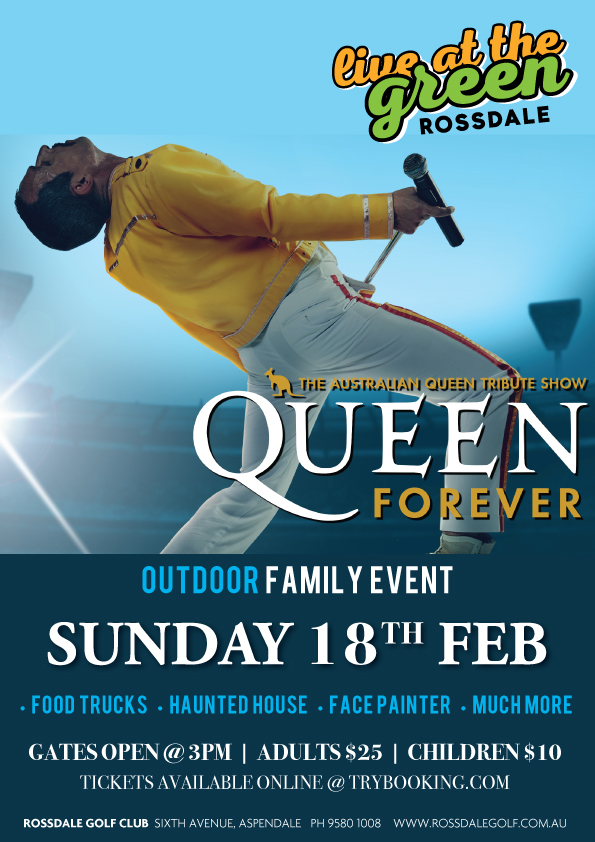