After a jam-packed 2017 that has involved yet another sold out run around the country with his extraordinary backing band, a month of shows in Europe, a guest appearance on vocals with David Bowie’s band at the Sydney Opera House and a second invitation and appearance at India’s NH7 Weekender Festival, Paul Dempsey hits the road again for a run of solo shows in regional NSW, VIC and ACT in February. These dates will take Dempsey, one of Australia’s most respected singer songwriters, out of the major cities and into regional centres for the first time in a year.

Having released his second solo album ‘Strange Loop’ to outstanding reviews and a top 5 ARIA chart debut, this run of shows will showcase Paul’s formidable talent as he takes to the stage on his own, offering fans intimate and stripped back interpretations of songs from ‘Strange Loop’ as well as his gold-selling debut ‘Everything Is True’, plus the odd well-chosen cover, something that Paul has a unique talent for. These shows promise to be an up close and personal evening with one of Australia’s most singular artists.

Paul Dempsey performs this Friday February 2 at SS&A Club in Albury.  Doors open at 7.30pm for an 8pm show and tickets are selling fast from www.ssaclub.com.au.  For more information find Paul on Facebook of follow the ticket link below. 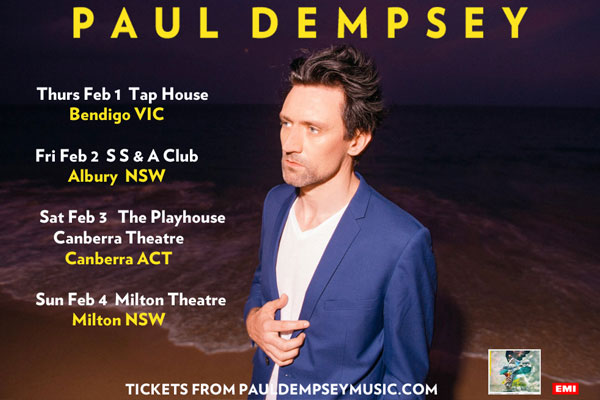