Ten years is a looooong time in rock & roll. To these guys, it’s a blip on the clock. Because they know how to rock. This Friday June 17 the Abs80’s crew including Scott Carne, Dale Ryder, Sean Kelly and David Sterry hit Matthew Flinders Hotel on their ‘Ten Years Young Anniversary Tour’ promising to knock your socks off with epic 80s tunes that’ll get your head bopping and your feet stomping.

Featuring Kids in the Kitchen’s Scott Carne, Boom Crash Opera’s Dale Ryder, Models Sean Kelly & Real Life’s David Sterry playing their big hits like ‘Send Me an Angel, ‘Change in Mood’, ‘Onion Skin’, ‘I hear Motion’, Current Stand’, ‘Best Thing’, Out of Mind out of Sight ,Catch me I’m falling and loads more chart-toppers.  You get a rocking two hour show with our best-loved and biggest 80s hits, sung by the guys that sang ’em back then. They’re the real deal. Sure, they’ve been around but that’s what makes ’em so damn good!

So, dust off your shoulder pads, bust out some fluoro and lube up your leather. It’s time to get funky with the best 80s show in the country: the Absolutely 80s ‘Ten Years Young’ Anniversary Tour. You ready? Let’s dance! 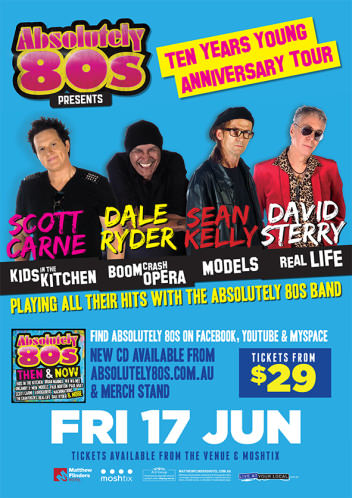