If you’ve ever caught yourself changing the words of an innocent song into a bawdy ballad, then you can be assured that comedian songster; Kevin Bloody Wilson has had an effect on you at some stage in your life. When his debut album Your average Australian Yobbo was released in 1984, Wilson never imagined that 30 years onward his popularity would be so prevalent that he’d be releasing his 18th album entitled Wrong Wrong Wrong, while touring the world including Australia.

Growing up in Kalgoorlie inspired his comedic side.   He met his wife Betty there whom later became his tour manager, doing the logistics, bookings, merchandise and much more due to her background in accountancy. He still keeps friends with his old mates from his sparkie days too. In fact it’s his friends who continually inspire him to be Kevin Bloody Wilson. He claims they are funnier than him.

“The trick to stay motivated is this. I get them together every so often and put on a slab of piss, get them drunk, then steal all their good material, that’s basically how it works.” He laughs.    Jokingly he claims that the Kalgoorlie funerals were more fun that city weddings.

I asked Wilson what his basic philosophy is and how he feels when people may look down their noses at him. He totally understands not every one is into his type of humor. But the jokes on them cause he goes out of his way to shock them. He can’t help himself, as he is the perpetual larrikin. In fact, tattooed on his wrist is D.I.L.L.I.G.A.F, translating to Do I look like I give a f@#k. He doesn’t care less if they have an opinion on his gigs cause they are not buying his CD’s or tickets to his shows anyway.

Nevertheless, Wilson has just come back from doing a month of sold out shows in America and his popularity is as strong now as it was when he began thirty years ago. Wilson’s warmth and down to earth personality along with his larrikin showmanship, natural talent and keen observation of his fellow human gives rise to his mischievous sense of rude humor. He never tries to analyse what he does. If it keeps making his mates laugh then he will continue doing it.

A highlight of his career was doing his own sold out show at the London Palladium around 1997 called The Far Canal Tour.

Interesting enough, his prime objective is being a good father, husband, and grandfather to his five grandchildren. He has been happily married for 44 years. This is instilled in his daughter Jenny, a talented comedian like her dad; that her two children come first.

However, Jenny Talia from Australia as she is known does follow in her father’s footsteps performing bawdy songs and is currently based in Chicago. Her bawdy ballads come from the female perspective, with the likes of Camel Toe and Chocolate is Better than Sex.

Wilson and I chatted and laughed for over 40 minutes. Ironically we were both in our cars parked in random car parks, me in Carrum and he in Perth, as we conversed.

He had me in hysterics when he explained the meaning behind his Born again Piss Tank album of some years back. “It’s a take on the Born Again Christians who don’t have a sense of humor. I gave up drinking for two days. During this time I got an epiphany that I cant live without alcohol.”

Wilson thinks it’s a hoot when people sing their own bawdy ballads knowing full well he’s probably influenced them in some way. He grew up listening to the ole dinky die ballads and was changing the words even then.

For example he says, Chris Kristofferson’s song, Take the Ribbon from your Hair was changed to Wipe the Dribble from your Chin….. .

Wilson understands we all have the propensity to do that sort of stuff, to make it fit.

Wilson is inspired by life itself but tends to follow Mark Twain’s thinking when it comes to religion, and that is: “Religion was invented when the first con man met the first f@#*%ng idiot.”

But as far as a higher power goes, well someone has created this amazing day in Perth, he claims.

Kev lands at Rosebud Hotel this August with his Second of the Final Farewell Tours Perhaps. He laughs saying, “the trick is I’ll probably do four years of Final Tours, then take six months off. Then I’ll start with The Come Back Tours and try and do more come back tours than Farnham. Then I’ll get myself diagnosed with Bi polar and do the Split up Tour, take another six months off then come back with the Reunion Tour.”  He laughs roguishly.

BOOK YOUR TICKETS NOW for Kevin Bloody Wilson at Rosebud Hotel, Nepean Hwy, Rosebud on Tue 16th August.  Tickets on sale now from the venue or follow the link below. 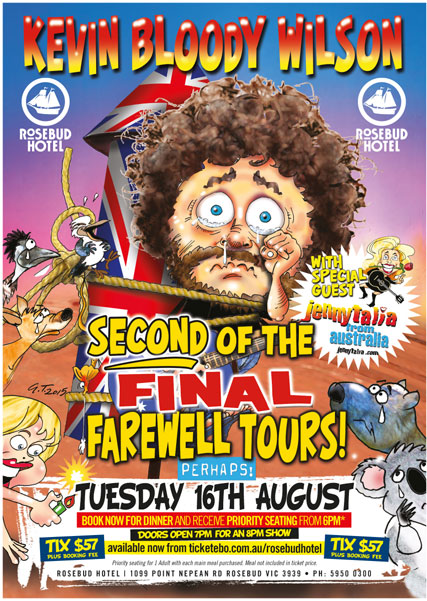