Checkerboard (Lounge) have been one of the longest running anomalies of the Melbourne music scene in the last three decades.  What can only be described as “impro-infused soulful blues, from a wealth of worldclass players, co-creating dynamic events in music”, Checkerboard is a ‘MUST EXPERIENCE’ for any music lover as they make their way to Sunday Soultrain at Davey’s on August 9.

Front man, singing drummer, Carl Pannuzzo is most often accompanied by current line up, Amos Sheehan on bass, Shannon Bourne on guitar and Garrett Costigan on pedal steel, with occasional floating extra members, from Tim Neal, Steve Heskith (Jet) or Oz legend, Rev. Mick O’Connor on Hammond Organ, Broderick Smith on harp, Willow Stahlut or Nigel McLean on violin or special guest guitarists, to many other part, string, percussion or horn players.  Together they traverse an often spontaneously inspired universe of sound, from the most solid and soulful rockin’ blues and roots-based traditions to dynamic journies of random collective improvisation.

With anyone’s guess of the intention of whatever members are present on any one night, this band is as rare as it is blessed with being perhaps one of the most variable and moment-stealing groups of masterful musicians, rewarding the attendee’s curiosity with any range between at least a total feelgood and humorous time to some blissteringly real, raw and spirited event moments in music.

Operating on the concept of the ‘live-feed’ of inspiration, they have seldom recorded over their nearly 20 years, but intend to soon. The current core line-up is at the peak of their listening relationship and interaction to be able to create seamless elements of seemingly rehearsed outcome from nothing. Over the years, the invitation to guest players and singers, most remembered during their renowned 7 year Sunday residency at Richmond’s Great Britain Hotel( which would often see up to 7 hours of music played a night), saw some great musical unions and encouraged many young musicians to explore and develop in this precipice atmosphere. In every case, Checkerboard’s energy and engagement with Madame Music is expressed with reckless abandon and infectious joy. In the words of guitarist, Shannon Bourne, “It’s like surfing a wave of mercury”.

It’s really just too hard to describe, but as many a traveler has been told by many a music lover: “If you only see one band in Melbourne, make it Checkerboard!”. Opportunities to do so are increasingly scarce as founder, Carl Pannuzzo works often internationally. Expect the unexpected!

“You could run a small city off these guys”…(Fiona Boyes)

“You damn crazy, now you done freaked everybody out!”…(Patti LaBelle)

At its core, being at a Checkerboard gig is like plugging into the source of all that is real about music. Every moment is the product of the people that are present and you can be guaranteed of a moment out of mind.  Don’t miss this golden opportunity to experience the magic of Checkerboard as part of Sunday Soultrain at Davey’s hotel, Nepean Hwy Frankston on Sunday August 9 from 3pm.  Free Entry. 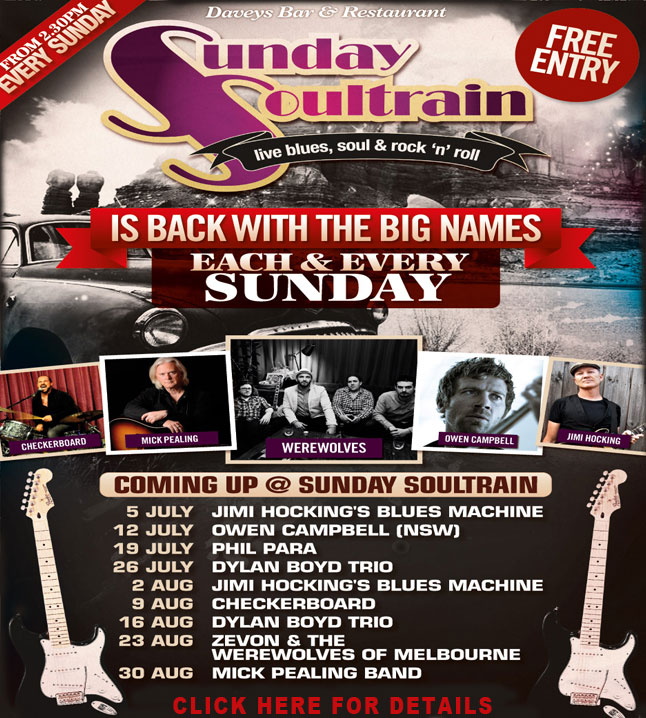