It might be a while until the weather gives us reason to bust out our wooly sweaters, but your unrelenting urge to get the knitting needles clickety-clacking can be satisfied in what is probably the cutest and most caring way – by knitting a penguin a pullover!

While the image of any animal in a sweater can make the surliest of folk weak at the knees, there’s a really important purpose to the campaign of Phillip Island’s Penguin Foundation. The lovely people of the foundation are asking knitters from around the world to stitch up teeny jumpers for penguins in rehab. 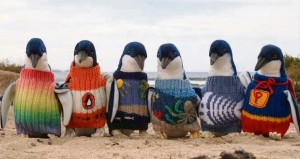 Knits for Nature is an ongoing program that begun after a number of oil spills near Phillip Island in the late 1990s to early 2000s. Almost 500 little penguins were affected by the last major oil spill in 2001, with 96% successfully saved and rehabilitated at the Wildlife Clinic and released back into the wild.

The knitted jumpers are placed on the penguins in the rehab centre prior to proper washing to prevent them from preening and swallowing toxic gunk. Knitting patterns can be accessed at www.penguinfoundation.org.au, where you can also read up on other ways to support the Penguin Foundation and our local population of plumed pals.