With a well-earned reputation as one of the country’s most exhilarating and hard-working live bands, The Preatures today have announced their largest national headline tour to date. Covering all parts of the country, the Sydney band will head out on the road this June playing 40 dates on their National Magick Tour. The tour kicks off at Wintersun Hotel in Geraldton on Saturday June 16th wrapping up at Gap View Hotel in Alice Springs on Saturday 8th September.

Always keen to take their live shows to regional areas, as seen when they launched their Girlhood album in Brunswick Heads last year, the tour will visit towns and cities over 4 months with Melbourne singer-songwriter Ali Barter supporting.

“We’re over the bloody moon to tell you that we’re going on our biggest tour to date, hitting up far reaches of the sunburnt country we’ve never even dreamt of playing to, and Ali Barter is coming along for the drive. We’d also like to remind our fans to stay well away from ticketing sites such as ViaGoGo, their only aim is to rip you off. You should only ever buy tickets through our accredited ticketing partners or at the venue.”

The Preatures have had a sensational start to 2018 supporting the Foo Fighters, performing at Twilight at the Taronga and Melbourne Zoo, Reverb Festival, Castaway Festival, Party in the Paddock, Mountain Sounds & Golden Plains Festival. Tomorrow the band will head off on tour with UK mega sensation Harry Styles for his Australian arena shows.

The Preatures’ 2013 hit ‘Is This How You Feel?’ catapulted the group from Sydney’s worst kept secret to Australia’s freshest music export, landing them on stages at Glastonbury, Coachella, Bonnaroo and the Jimmy Kimmel Live! show. It clocked in at #9 on triple j’s Hottest 100 poll, won the coveted Vanda & Young Songwriting Competition, and earned them high praise from fans as diverse as P!nk, Harry Styles and the late, great Doc Neeson.

Their debut album Blue Planet Eyes received critical acclaim across the globe, and debuted at #4 on the ARIA Chart. The band were nominated for 3 ARIA Awards in 2015 for Best Live Act, Best Group and Best Rock Album and won GQ’s Band of The Year Award. Current album Girlhood, recorded and produced at their Doldrum Studios in Sydney, includes singles ‘Girlhood’, ‘I Know A Girl’, ‘Your Fan’ and ‘Yanada’, the collaboration with Indigenous songwoman Jacinta Tobin.

With countless sold out shows under their belt, The Preatures are not to be missed on their biggest headline tour yet.  Catch them at Chelsea Heights Hotel on Friday July 20 with special guest Ali Barter.  Doors open at 8pm and tickets are on sale now from the venue and Oztix.com.au. 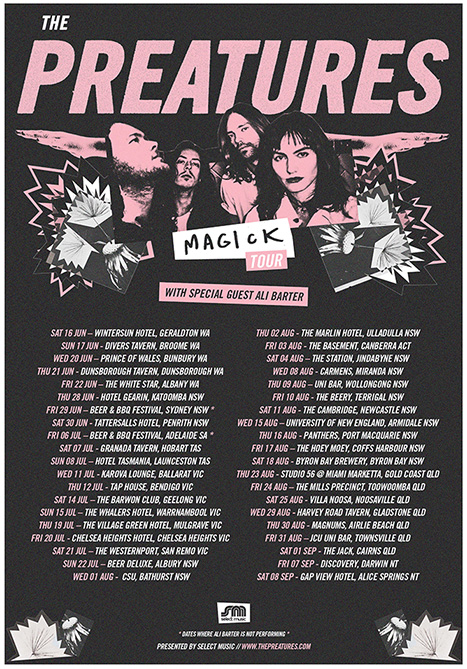