For more than a decade local band FUDGE have been a late-night institution for party goers visiting some of the Peninsula’s biggest and busiest live music venues.  The first Friday of every month, sentimental sing-a-long-lads FUDGE kick off the new look Friday Live format from 9pm at Westernport Hotel in Hastings.

FUDGE front man Jordan Mills and his extensive crew of band mates have seen thousands upon thousands come and go, including revelers, staff and management in venues right across the region…making them one of the longest serving bands on the block.  Holding some of the longest local residencies including a monumental 11-year stint on Saturday’s at Flanagans in Frankston and some crazy regular gigs at hot-spots including the Langwarrin and Bay Hotels.

Plenty of big hits and classic anthems is always what you’ll get from these local boys and always plenty of familiar faces among their loyal crew of fans.  Jordan, along with Glen Mantel and Ben Webster, the boys from Fudge swing in to an all new Friday night live concept at Westernport Hotel in Hastings on Friday May 4 from 9pm and return the first Friday of every month! 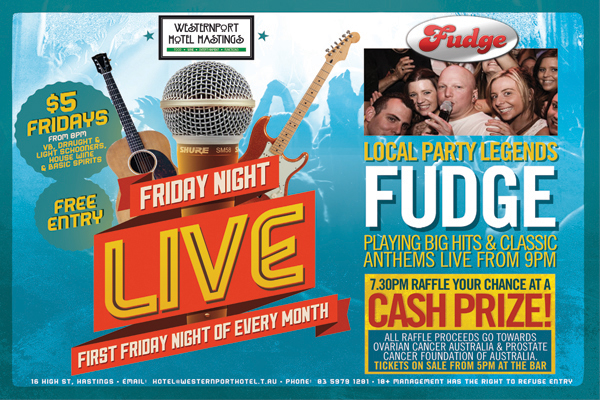