Friday Night Blues at the Seaford Hotel keeps coming back with the big guns and there’s none bigger than the multi-award-winning Greg Dodd and the Hoodoo Men who make their Friday Blues Club debut on April 13.

Featuring the acclaimed guitar guru Greg Dodd along with Clint Healy on bass and singing drummer extraordinaire Tim Stout, The Hoodoo Men are a powerful electric blues combo with a swag of original tunes and well-loved blues standards.

Greg has toured extensively around Australia playing at almost every major blues festival. Playing alongside some of our countries best but none greater than the “Godfather” of Australian blues, Dutch Tilders. In 2013, Greg represented the Melbourne Blues Appreciation Society as a Blues Performer of the Year in Memphis TN at The International Blues Challenge performing at BB King’s Club as a semi-finalist.

The band’s debut CD 3am blues LIVE was #1 on the Australian blues & roots airplay charts for two months when released, & also took out second place in 3 categories in the MBAS Vic/Tas awards. It was also voted by The MBAS as best self-produced album 2013-2014 & will be entered into the ‘Best self-produced album’ category awards at the International blues challenge 2015 in Memphis TN.

In 2014 the album 3am blues LIVE was awarded best blues album of the year in the Age Music Victoria Genre awards.

Their performances are a mixture of up-tempo swings, shuffles and boogies as well as a good selection of slow blues with fiery guitar licks and dynamic harmonica riffs delivered with intensity straight from the heart – as all blues music should be played!

Catch Greg Dodd and the Hoodoo Men Friday April 13 at Seaford Hotel from 8pm.  For dates and deets on all the exciting acts headed to Friday Night Blues Club including Phil Para, Sammy Owen, Jimi Hocking and more visit www.PEARLHQ.com.au 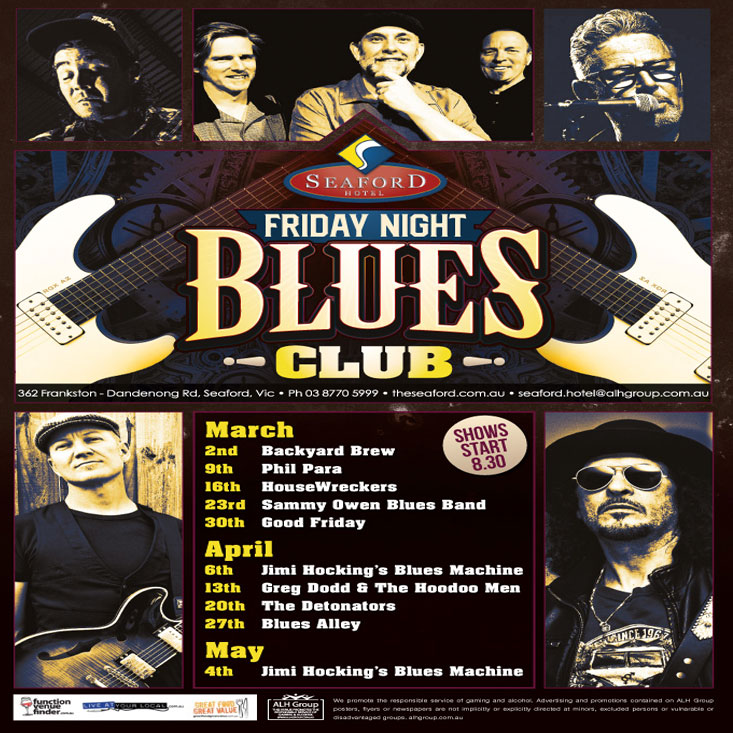